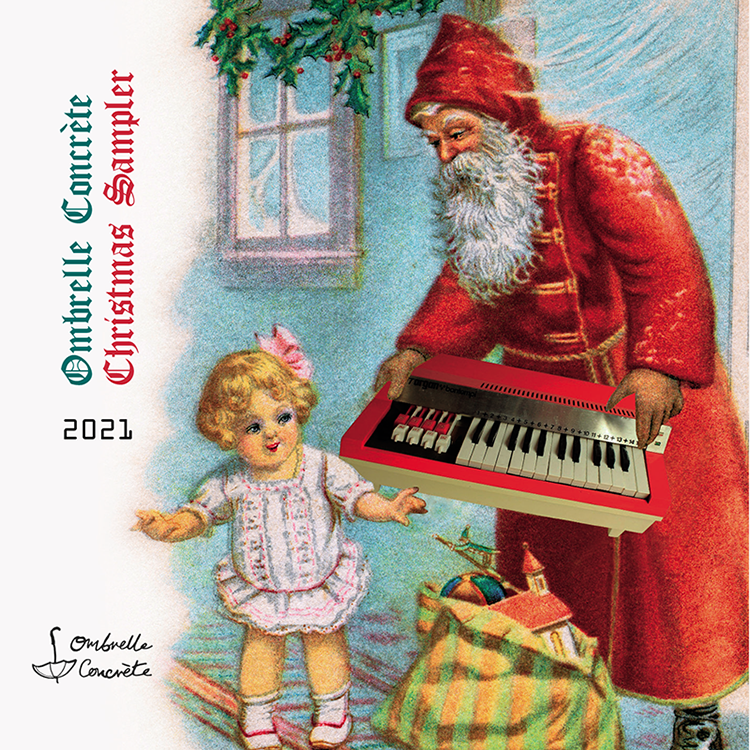 Another year (almost) over and what have we done?

Well, Ombrelle Concrète has a new collection of alternative gifts for you to indulge yourself with, this Christmas.  Contributions from as far and wide as London, Newcastle, Toronto, Ilkley, Medway and Kent.

All profits from the CD sales and Pay-what-you-want downloads will go to The Medway Street Angels – a charitable organisation helping the homeless & those in need across Kent & Medway.

Rastko is Chris Allen & Rob Shepherd with John Forrester. The song was originally released on Vacilando ’68 in 2015. This version was remixed by Terry Lane and includes Oliver Allen on 12 string and electric guitar.

Brutalist Architecture In The Sun

Brutalist Architecture in the Sun is a coldwave pop duo (Dean Clarke – electronics & Cye Thomas – vocals) from Rochester, Kent. Founded in 2015. They are currently working on their sixth album.

Every now and then our haunted synths come alive at 3am and tell us what they really want to say. SepiaWinterDreams is a track of Christmas times past.

Hoodening is a traditional rural Kentish Christmas celebration, a mix of song, scurrilous humour and morality play. The modern revival sees it closer to other traditions such as mummers and guisers, but its original meaning and purpose is lost to history.

Based in London, Andrew Kesbey AKA sourmilk explores his environment and the metropolis using improvised electronic soundscapes and field recordings and scuplts cathartic expressions of urban tension and electronic brutalism.

Born and raised in North Kent, John Hart now lives off-grid in rural Ontario, Canada.  He swapped his guitars for modular synthesizers many years ago.  When not recording in his home studio, he’s busy keeping grizzly bears and coyotes out of his chicken coops and prepping for the end of civilization.

In another life, Jane Wrangham was the distinctive and powerful vocalist with indie band Millions of Brazilians. Following a hiatus of almost 15 years, she has recently returned to recording.  Performing as Noosk, she has stepped away from the traditional concept of verse/chorus and found a new way of composing with computers and electronic equipment which she says gives her endless possibilities.

Trevor Mason started piano lessons at the age of seven.  He was frontman and guitarist with Medway band, The Round before becoming a music columnist for the Kent Messenger Newspaper Group.  He has also been a music promoter – culminating in Gillingham’s Parklife music festival and a music officer at Arts Council England. He now run a small music project studio, often collaborating with other musicians.

This re-working of an early Christmas lullaby blends the sounds of an afternoon country walk with a stripped back keyboard melody. Stuck together by Trevor Mason ably assisted by Glenn Hamer.

Clive Smedley has been recording as The Bleak Industrialists since 2017. His output is best described as pieces of freedom and clarity through jazz, neo-classical and contemporary electronica horizons.

Tamam Shud is the electronic project of Nick Wood – the polar opposite of his other music output with anarcho punk rock band Decontrol. He lives in County Durham with his daughter and spends his time listening to music, cricket scores and watching Scottish Football.

the closer we are to dying is Terry Lane. The music falls somewhere between the cracks of drifting, angelic hypnotic ambience and darkly unhinged forces cutting through with intimidating and nightmarish tales of horror.

From improvised knob twiddling and a love of ambient soundscapes to wonky electronica and disjointed reverb, whthppnsfpshthtbttn? continue their search for whatever it was they were hoping to find.

Swilly lives in Rochester, Kent. By day he is Simon Williams. His music is best described as spasms of rhythmic soundscapes and tape loops interspersed with ranting, primitive guitar wrangling and experimental mumbling.

Concrète News, Concrète Releases, sourmilk, swilly, The Bleak Industrialists, the closer we are to dying